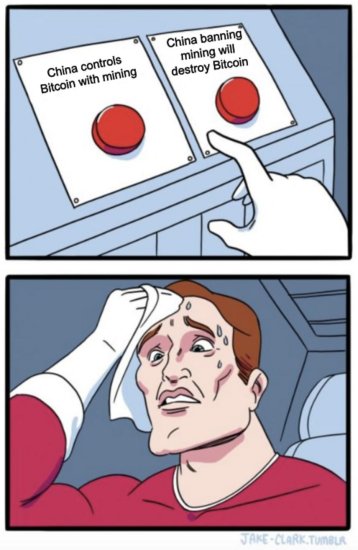 China-related scaremongering belongs to media’s most favorite Bitcoin-related ‘FUD’ it sometimes seems. While spreading rumors of imminent ‘Bitcoin bans’ or ‘mining bans’ has mostly disappeared since 2017, the dominance of mining pools based in China, which are interpreted as imminent risk for a so-called ‘51% attack’ on Bitcoin, is an evergreen. Let’s have a quick look at this and how reasonable such threat scenarios are.

Mining pools are essentially joint groups of Bitcoin miners who combine their computational resources (‘hash power’) over a network to improve the probability of finding a block to ‘win’ the finder’s reward paid in Bitcoin. The miner can then store transactions from the mempool in the new block and receive their transaction fees. According to various mining pool statistics, mining pools with their headquarters in the Greater China area are estimated to currently dominate Bitcoin’s hash power with 60%-70%, but Chinese miners – physically located in China – are estimated to only make up 32-40%. The reasons for this still relatively high dominance are probably multi fold: Chinese-based pools belong to the ‘oldest’ ones, so naturally, they accumulated numerous loyal miners around the world over time. Also, the majority of semiconductors are produced in Asia, and of course the relatively easy access to cheap sources of energy (back in the day it was mainly coal, these days the highest percentage are renewables with wind power and hydroelectric power, mainly in areas where there is massive over-supply of energy but under-supply of demand, so it’s cheap to set up mining operations in China) also gives China-based mining corporations / pools an advantage.

So let’s think of a theoretical scenario in which certain entities within ‘China’ would identify the bosses of the respective ‘Chinese’ mining pools, and strong-arm them to act against their business interests (which are to make money mining Bitcoin, and to keep up the Bitcoin price instead of causing market panic) – by collaborating for a 51%-attack on Bitcoin.

A 51% attack can’t attack the Bitcoin consensus (network rules), which includes no double spending, valid signatures, no introduction of more currency than allowed etc. These rules are verified by the 10,000+ active Bitcoin nodes (of which there are very few in China by the way). Bitcoin network nodes are usually run by advanced Bitcoin users around the world of which only a hand full are also mining.

What a 51% attack can do is to attempt double-spending. If an attacker controls more than half of the network hash rate, he can generate blocks faster than the rest of the network. So after sending some Bitcoin to a vendor, he could send the same Bitcoin to himself and then attach them to a new ‘fork’ of the blockchain. If thanks to his hash power this forked chain becomes longer than the branch built by the honest network, the vendor would realize that his payment in fact didn’t arrive because the forked chain containing the ‘hijacked’ transfer was considered as the ‘real’ chain by the Bitcoin network.

However, the more confirmations an entity requires before accepting a payment, the higher the aggregate resource cost of performing this attack, which could make it unprofitable or delay it long enough for the circumstances to change or slower-acting synchronization methods to kick in. A majority attack was more feasible in the past when the network hash rate was much lower.

…or slowing Bitcoin down: this form of attack is not as direct as the one described before, but still capitalizes on existing mining dominance: either by technical means (like China’s ‘Great Firewall’) or by mining empty blocks, the playing field gets distorted by adding latency for other mining pools, or generally

To be fair however, a 51% attack could cause at least temporary problems for the Bitcoin network by slowing it down, triggering lots of (partially justified) ‘FUD’, and in a worst-case scenario of ongoing attacks (‘Goldfinger attack’ aka ‘pissing attack’), it may ultimately even force the developers to jump in to block the adversaries, which would put Bitcoin’s censorship-resistance into question.

But despite the likely temporary setbacks in public confidence and price development, many ‘hardcore’ Bitcoiners even wish for a governmental attack, as it would result in a high chance of the Bitcoin network becoming even more resilient and hardened to attacks as a result. Also, such an attack could result in ‘good riddance’ of bad actors in the system and a redistribution of hash-power (the individual miners would switch over to honest pools), with the network becoming significantly more decentralized than before.

What will help Bitcoin to become even more resistant against potential 51% attacks?

On a sidenote: a 51%-attack (a.k.a. ‘majority attack’) has never been successfully executed on the Bitcoin network, but it has been demonstrated to work on some small altcoins.

What are your takes on this seemingly quite emotionalizing topic? Add a comment below if you want to share your thoughts.